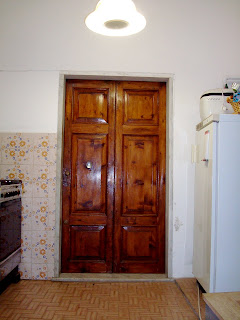 For 5 years now the room behind this door has been somewhat of a mystery (and a waste) in casa nostra.  We know it has been filled with our landlord's junk including her aunt's bedding from 40 years ago (gives you a good idea of its very useful contents huh?).  Well, yesterday our landlord showed up saying she wanted to clean it out and we could use it.  Of course, I stood there rather perplexed as this woman bulldozed passed me and open up the mystery door.
The stench of mold, dust and god knows what else was almost overwhelming.  And being one with allergies, I had to walk out after about 10 seconds.  Being that I obviously had no say on what was going on and that I had an appointment in La Spezia, I decided to let the landlord have her way and I took off (in hopes to return to something at least somewhat organized and less smelly).
Here's what I came back to: 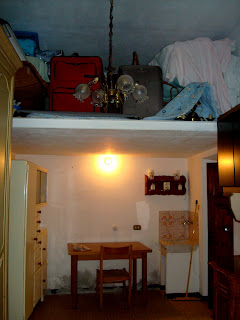 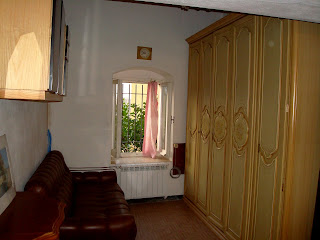 Ok, it's "bruttina" (a little ugly), BUT it's another room.  Our stuff has been piled high in our little apartment for so long and almost jumped for joy and kissed my landlord at the opportunity of having somewhere to put stuff (I didn't kiss her though, promise).
Now the big question is can we make this "livable"?
You've seen the "before" photos, let's see what magic Lui and I can whip up and maybe there will be a guest room in Casa Guerrera.
Posted by Megan in Liguria at 08:27

Meg, how exciting. Now will she be leaving all the furniture in there? Are the suitcases in the overhand yours or hers?

I could definitely see blocking the overhang with some cool Ikea fabric curtains.

Mix of both. Curtains would be nice, but they are the least of my challenges to make the place passable! :)

Fabulous! The mystery room is no longer mysterious. With a little help, its character will shine through. Have fun making it happen! xx

Congrats on getting more space. Have fun decorating, can't wait to see the results.

Oh my! I was expecting a closet, maybe even a BIG closet, but a whole other room?!? That's hilarious and wonderful. :)