Inside the Italy Dream 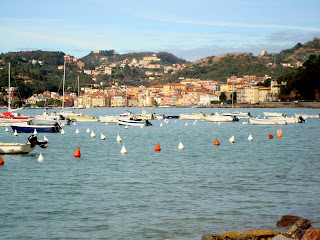 San Terenzo di Lerici this morning
I took Lucy for a walk down in the village this morning as we're having a mini-break from the rain and my head was full of thoughts pertaining to living here in Italy.
In the past 10 days, I have received 4 different emails from women looking to move to Italy and wanting my advice. My initial reaction to them was to laugh and say "are you serious?!"  But I realize that has much more to do with this being the worse and wettest winter in 20 years than the cold, hard fact that it is not so simple to just pack up and go.
I never wanted to squash someone's dreams.  I had one just like them and made it happen.  It was not your stereotypical "Under the Tuscan Sun" dream (but in some ways maybe better and certainly more romantic). What most people don't realize is that if they saw the film, it was not the same as the book where Frances Mayes is happily re-married and has a whole lot of money to build that of so perfect home called Bramasole!
Too many are "looking for a change" without researching or studying the plus and minuses of making such a move, and it's really important to do so.  So, here is my advice to anyone looking to make the "Italian move":
1) The technical stuff: If you plan to stay more than 90 days in the county (or in the EU in general), you are required to have a visa to be legal.  If you choose to do otherwise, it is your choice.  But in 2008, the Italian government really started cracking down on this, so please do be aware of the circumstances.
Visas are very difficult to obtain without being married to an Italian, having enough Italian blood for citizenship, are retired with lots of money, just have lots of money, owner of a property here or a student currently enrolled in a language school in Italy.  You can contact your local consulate for more details.
If you decide to go the student route (which if you have none of the others is your best bet), you must be enrolled and received a certificate of enrollment in order to apply for a visa.  Last I heard, the consulates had become very strict about these visas. They are not as easy to obtain as they once were. When doing a search online, look for schools that actually discuss a certificate of enrollment in their text.  Some schools that do offer this are:  Scuola Leondardo da Vinci (went to the one in Florence and really liked it), Dante Alghieri, Babilonia and Centro Puccini.  There are many others, but these are ones where I know people obtained visas.
2) Financial stuff:  Depends on where you decide to live but in general you are not going to be living for that much less than you did in your homeland.  The big cities (Rome, Milan and Florence) are expensive but world standards.  Many smaller areas are surprisingly expensive as well.  For example, if you choose a resort area (seaside, mountain or country - and Tuscan goes in this category), it may be reasonable in the off season, but it could double in the high season.  I once looked at an apartment where the owner offered me a rent of 250 Euros in January and February, but the rent in July and August was 1500!  Less expensive places include Puglia, Calabria, Le Marche, Emilio-Romana, Basilicata and Sicily (outside of Taormina of course!). Anyone interested in the Italian Riviera (where I live), it's not cheap but certainly not like uber-caro So Cal where I come from.
Be prepared to pay a lot more for things you take for granted.  If you like Peanut Butter, it will not be an east find and will cost 5 Euros (=$6.40) for 250 grams, that's about half a jar in the states which you can get at Target for $1.80!  A coke costs more than a glass of wine just about anywhere and you won't get re-fills for free. "Exotic" or out of season fruits (strawberries my friends!) can cost a king's ransom.  Brand name make-up, such as Lancome or Clinique, cost the same in Euros as in dollars (so as of today 28% percent more), and the lower brands such as Maybelline and Cover Girl are about 40% more expensive.  If you are a mom, I hear diapers are through the roof.
Do not expect the same job opportunities or salaries you had in the states. For one, it is very difficult to find a job in your trade without proper licensing or certification in Italy (which also costs money and can take a lot of time). Here is a example of salaries. Note, it is very common to make less then $25,000/per year!
On the positive flip side, you can get a great bottle of wine for under 3 Euros, pasta (although on the rise by Italian standards) is dirt cheap by American standards and fresh fish is almost a steal (fresh salmon steaks for a little as 7,90 Euros a kilo = $3.50 a pound!).
3) The stuff you won't necessarily know until you move here:
There are more but I feel I am already treading in mirky waters between cynical and negative when really I am a positive person!
Why do I write this?
Obviously this is just one person's point of view and experiences.  I welcome my fellow Italy blogger friends out there to add to, and even contradict, this post (in comments or on their own blogs) in order to provide some realities to make someone's dream come true.
P.S. And if all else fail, Expats Italy is an excellent site to learn more about moving to Italy.
Posted by Megan in Liguria at 13:17

Thanks for this post. I am living in the Bay Area right now and also considered moving after college until I researched it and found it to be expensive and confusing. Having a job there or knowing the language a little might make it easier someday! I decided to hold off and make a few visits first, and maybe someday...

Nice post! I love Italy, and can see myself (with my sweetie of course) on extended stays there some day. I don't see us living there permanently, but life has taught me to never say never. I interact with a lot of Europeans at work, and it can be very different than interaction with Americans. Business-wise they can be so blunt and direct, it's sometimes difficult to interpret, but then when it's social time, they are so amazingly warm and friendly. I hope you will continue to share your experiences and observations! CM

Just one addition, Meg. You can also get a visa if you are married to a citizen of a member EU country. He or she does not have to be from Italy. And this year, EU members do not have to apply for visas within the EU. In other words, a German can live in Italy without having a permesso di soggiorno. For an American married to an EU citizen, we get a five year permesso which gets renewed without problem.

What a charming story. I was in a bad mood today and your story made me smile. Thanks.

Thanks for the addition, Di. Didn't think of that one. xx

Thank you so much for your visit and for the nice comment! Your blog is very nice and interesting! You live in a lovely place with wonderful sea and delicious food!
Nice to meet you!!!
Have a great week end!
Un abbraccio
Vale

These are all great tips.

If someone plans to move here they should try to spend as much time here BEFORE the move. Rent an apartment, instead of staying in a hotel. If you can take time off from work/ school stay for month or more. There's a big difference between being on vacation here and living here.

Start studying the language before the move. It will make the transition a lot easier.

I live in rural Central Italy which tends to attract people with young children from the UK and northern European countries. Moving here with children poses a extra set of challenges and I think it is useful to remember that it takes time every day to get to know the culture, learn the language and make friends over a period of several years. It is the most tiring thing that I have ever done, yet the most rewarding.

Good, honest advice! I receive a healthy number of emails like you do, and I am always honest about the realities...it's a beautiful, friendly, historic place but life (and bureaucracy!) ain't easy! And I can say that Marche is not very inexpensive anymore, unfortunately. :(

Nice to read your comments. you forgot the difficult to get a Pepsi.

When I talk with americans seems to be the biggest trouble !!!