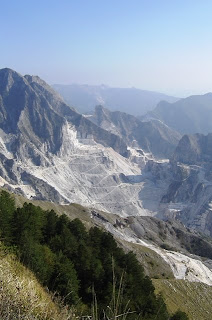 Carrara, itself, is a nice-size Tuscan town of about 65,000 people nestled between the Apuane Alps and the Verisilian Coast. But what makes it special is what surrounds the town: an 18-mile ridge of that is basically one enormous piece of marble. This stone has been used since the days of the Roman Empire (both the Pantheon and Trajan’s column were once covered in it) and may be most famous for providing Michelangelo with a single perfect block that become known as “David”. 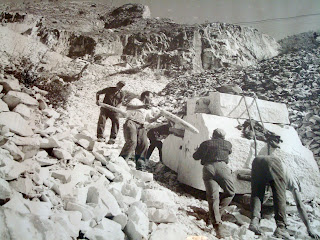 A visit to the area is one of my favorite excursions and can easily be done from the Italian Riviera or NW Tuscany: A Day in Carrara. Here is my suggested “way to spend the day”:
Start with a visit Colonnata. Built on small hill of marble (in between monstrous ones that surround you from all sides), this charming little village was founded by the Romans and housed the slaves forced to work in the marble quarries. Today it is still populated by “lizzatore” (quarry workers), but has also become famous because of its “lardo” (but better referred to as “the butter of Tuscany”). A sandwich of tomatoes and lardo between two slices of bread and some moonshine wine were a typical lunch for the quarryman. 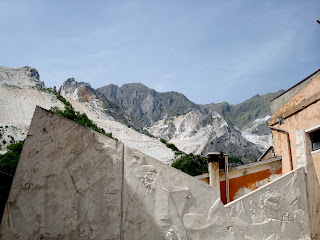 So what is lardo? (Disclaimer: the gross part here.) Well, it is the shavings from the back of the pig (called “spugnosa” or the greasiest part) which are put in a marble basin, known as a “conca”, a few hours after having been butchered. The conca is rubbed with garlic and herbs and then the lardo is placed on the bottom of it. Then a layer of salt, pepper, garlic and rosemary is added. The layering process continues with this recipe until the conca is filled and then it is covered with a marble slab. The lardo remains in the conca for 6 to 10 months. (I seem to be missing my up close and personal photos of lardo, so you HERE is an image from the web.)
There are several shops and restaurants in the village where you can try it. My favorite is a couple of slices between some fresh hot focaccia!
Next stop is the Fantiscritti with its spectacular views over the town of Carrara and the quarries themselves. Here you can visit inside a working quarry (600 meters inside to be exact!) and learn about the process of cutting and pulling out of the marble blocks. There is a small museum containing an exhibition of the various quarrying methods used over the past 2000 years. The tours are 30 minutes long in English, French & Italian and cost 7 Euros per person. 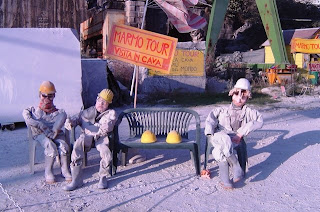 Afterward, head down into the town of Carrara to a Nicoli Studio (reservations necessary, nominal fee applies) for a 30 minute visit around this lovely marble studio and learn how statues and other art forms are created. 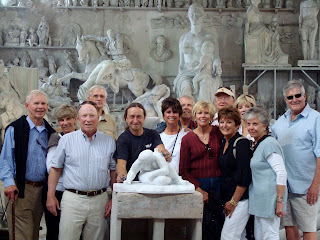 Last week's super fun group!
There is also the official Carrara Marble Museum (located on Via XX settembre) where you could spend another 1/2 hour learning about the techniques and history of this fabulous stone.
It’s a fun day: educational and interesting amongst an almost surreal setting. ENJOY!
HOW TO GET THERE: From the A12 autostrada exit at Carrara and then follow the signs for Carrara and "cave di marmo". You'll go through Carrara, then start to climb the toward Colonnata and the Fantiscritti. It takes about 50 minutes from Lucca or Pisa, and 40 minutes from Lerici or La Spezia.
Posted by Megan in Liguria at 12:22

Hi Megan
Wow that is a very interesting story..thanks for sharing. Not heard of Lardo before, not sure either .. maybe I will trust your judgement on that one :-)

Megan I just looked at your link to the "Lardo" not for me I don't think!!

I'm not for Lardo either ! I know Carrera and its surrounding areas well. I spent a few weeks there with my uncle when I was young - an odd twenty years ago !

We hit Carrera on a family vacation. While we were in the gift shop, me catching up on my breath and my wife shopping my 21 year old and his older sister took the rental car up into the mountains. They were so far up on the mining roads that we couldn't even see them. There was still marble dust embedded in that car when we returned it two weeks later!

Thanks for bringing back fond memories, except fot the Lardo!

Youre photos were wonderful! The group looks a little aged- did they survive":)
Loved the Lardo - a must for disbelievers! SOM

Megan, I am enjoying reading your blog (to which i arrived from slowtrav). I was wondering if you would be willing to reprint this carrera article on arttrav - with a top and bottom credit to you and paragraph (that you can write) about your business and what you offer. It'd be posted at the beginning of july (after i get back from elba). Please write to info at arttrav.com if you're up to it.
PS love the hiking photo of your italian husband with his dark hair, knapsack, and long shorts. Practically interchangeable with mine ;-).
Alexandra