Palermo & Beyond:
Too Much to See in Too Little Time... 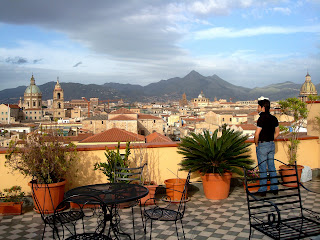 The terrace at our hotel
Saretta at Molfetta Daily Photo was right, we were in Palermo.  And Segesta, Erice and Castellammare del Golfo.  All in 2 1/2 days!  My friends over at Slow Travel would be disappointed at our "pace".  But it's all the time we could spare for a mini-research trip before the "season" begins.
We would have had 3 full days had our flight been on time, but instead we arrived late Sunday afternoon, losing a whole day to explore.  (Note: Windjet Airlines is a borderline nightmare!)  We stayed at a fairly charming 3-star hotel called Hotel Ambasciatori.  Our room was nice and clean, bathroom small but decent sized by Italian city standards and it had an incredible rooftop terrace. The negative about the place (or at least our room) was it was pretty noisy.  There was some strange generator noise outside our window that would turn on and off all night, and then next door to our room was an apartment where a neat freak began to vaccum each morning at 6:30AM, and then again around 7:30AM.  I would stay there again, just request to be in another part of the hotel.
Our first full day (and I do mean full), we had a private walking excursion of the city center.  Our guide, Jackie, was born in California, but had moved to Palermo with her family over 20 years ago.  Her parents were one of the few Italians who moved to the states and then actually returned to Italy.  Jackie was extremely knowledgeable and full of interesting insight on a city seems to go in two very different directions.  While there is a distinct "turn for the better" going on in Palermo, Jackie assured us it is still years behind and "all that mafia stuff is true".  (That I didn't really doubt anyway.)
We visited the Norman Palace with the newly open to the public Palatine Chapel which is a mix of 4 different cultures and architectural styles (German, Italian, Jewish and Muslim). 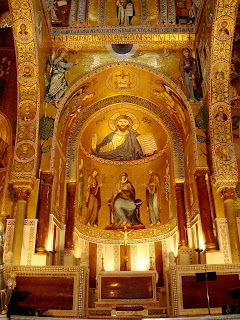 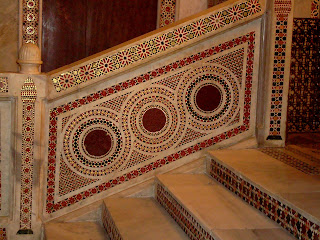 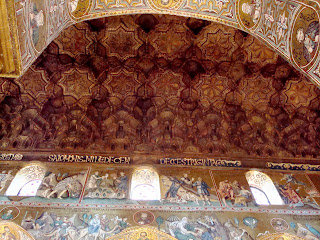 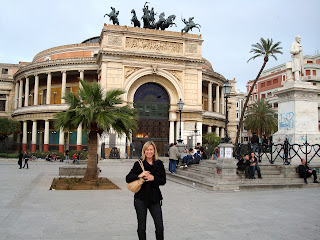 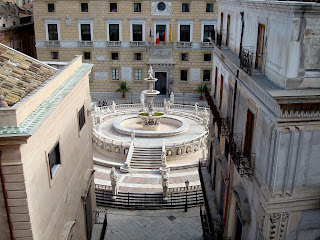 After a 3-hour plus tour, Lui and I needed some good food (not hard to come by in Palermo) and of course a dolce break. 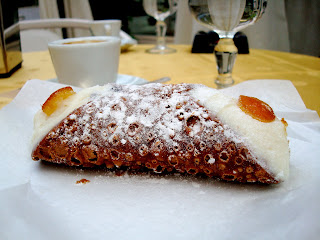 A canolo at Cafe Mazzaro
We had planned to make it to Monreale as well that day, but no surprise we ran out of time (as I had a work appointment that evening). Still we made it to the Crypta Cappucini, which is NOT for the "easily frightened or sensitive to skeletons" type of people. I had no idea I was either until visiting the crypt. Mamma mia is all I have to say!
That night we ate at one of my all time favorite restaurants in Italy, Lo Scudiero (Via Turati Filippo, 7 - tel: +39 091 581628).  I had eaten there 3 years before, and it had been one of the best meals of my life.  This night just re-confirmed what a special restaurant it is.  Menu as follows...
Antipasti:
Grilled neonate (tiny white fish grilled)
Tris Affumicato (thinly sliced pieces of smoked salmon, tuna and swordfish with oranges)
Second Course (we skipped the pasta in order to make room for dessert):
Gamberoni di Mazaro del Vallo (World famous grilled prawns from Mazaro del Vallo)
Spada al Forno (Swordfish fillet baked in an almond crust)
Dolce:
Cassata al Forno (Baked Sicilian ricotta cake, to die for!)
Semifredo di Mandorle (Almond semi-freddo)
Even Luigi had to admit, the food and service (a different server for each course!).  I cannot recommend this restaurant enough.  While not cheap, it's worth every Euro to have such a profound gastronomic experience!
The next day we headed west to Castellammare del Golfo and more.  But I'm saving that for another post.  Time to get to work.
Buon weekend!
Posted by Megan in Liguria at 06:56

Sounds like a short, but intense experience! Palermo is a fascinating city, with so many contradictions.

I love sicily though I never made it to Palermo. That meal sounds lovely.

Wow Megan I cannot keep up with you!!

Yes Short but sweet, sure you had a great time. I love Sicily never been to Palermo though, we were down in the Marine Park of Plemmirio,on the very tip south of Noto!

Megan -- pretty please will you send me your Palermo guide's name and contact info?

Can't wait to read more about your Sicilian adventures.