The Mother
I'm obsessed.  I've referred to it before in a blog about a year ago and I am haunted by her.
Vi presento "The Mother". 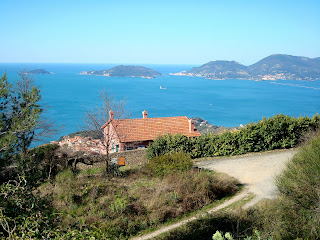 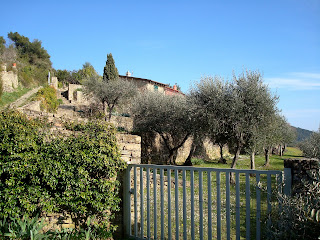 Two years ago, when my B&B dream was still alive and well, a client of mine came over to look at some properties with the interest to fund my possible high-end B&B/rental.  Finding the Mother was a bit of a fluke.  We'd hire the services of an architect (a family friend) to go with us to the various properties to assess their real value. That was an eye-opener in itself. And if the architect is working for you, you will find out that most places are valued at about 1/2 to 2/3 of what the asking price is. After a few houses not meriting anywhere even their value, our architect said, "Look, I know of something special, let me make a call".  Ten minutes later we were on our way up and up into the hills above Lerici known as La Rocchetta.
We were warmly greeted by a lovely older woman dressed impeccably and she invited us in to her property.  (I will now refer to her as "La Signora" from here.) Her meticulously groomed grounds were impressive enough, but the view and then her two houses were jaw-dropping, so much so that I forgot to take photos, no kidding.  She led us to a gate which brought us out onto the old Roman cobblestone road that makes its way from Lerici over La Rocchetta and down to Via Aurelia (all this through dense forest with incredible peaks at the sea to one side and the Apuane Alps to the other).  We crossed the road and she opened another gate.  And there she was. The Mother.
House #1 is traditional Ligurian fashion, hues of rose with green shutters. 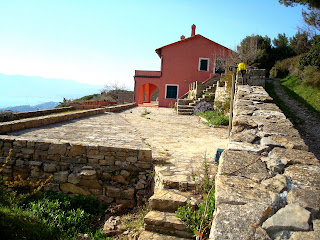 House #2 is very "Italiana", all of stone with green shutters and built into the terraced ground. 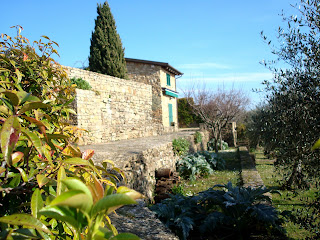 But it really isn't about the houses (and actually inside they're nothing special).  Its about the land with its terrace olive trees glistening in the sun, and with paragon views of the Gulf of Poets, Portovenere, Palmaria & Tino Islands and then on to Corsica and Capraia Island.  My first thought was "when I go to heaven, I hope it looks like this."  Pictures don't do it justice (especially mine).  Even the little website created for the place (of which I am still not sure why it was made, but I'm getting ahead of myself) doesn't truly express its AWESOMENESS. 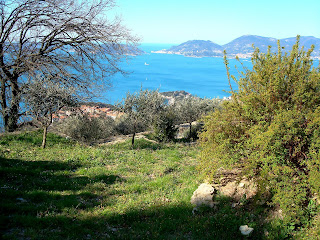 A little background on La Signora and it's all "hear-say".  The rumor goes, she was the nanny of the Visconti family from Milano, but eventually fell in love with and married the Count Visconti. When he died he left her these 4 houses on 2 properties on the hill.  She says she was born in Switzerland but then lived in Iran or Iraq (I think), and then fled to Canada and became a citizen there.  Needless to say, it's all quite blurry and according to anyone who knows La Signora, they say she's crazy. Our architect says she's "eccentric" which is OK by me.  Personally, I found her delightful.
So what happened next?  Basically nothing, and that might be why I have been so fixated on this place for so long. My clients LOVED the property, but La Signora never even mentioned a price. Our architect said he was unsure as well but that she might say "10 million one day and 2 million the next." That's Euros we're talking.  My clients were interested but needed to run the numbers to see what was feasible.  Without a price, it was all hypothetical. My clients returned to the states with the hopes of hearing form La Signora with a price.  But months went by and no word on The Mother.  Eventually, my clients moved on and although still had interest in the place, were no longer "actively pursuing it". I can't blame them. But there I was, stuck between my childhood dream and absolutely no idea what to do next. And I'm still there. 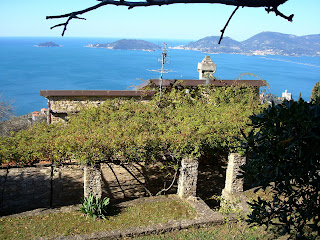 Saturday morning I decided to take Lucy on a hike to The Mother.  I hadn't been up there since that last blog post.  She was everything I remembered and built her up to be, and still 100% abandoned.  If I were to make a bet, no one has lived there since my first visit 2 years ago.  Why make a web site and why invite people to look at your property if you have no intention of selling it?  And why let it still there doing nothing for anyone? 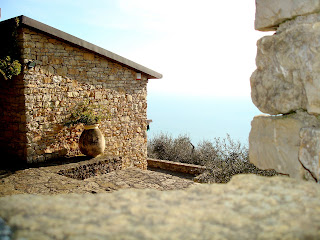 So here is my latest "plan" (mind you there have been lots of plans and I have not acted out on even one of them yet). I've written a letter to La Signoria, reminding her of who I am am, who Luigi is (she took a real liking to him, strange huh?) and then spilled out my entire childhood dream to her.  Should the woman be eccentric as described, she may find my letter and intentions admirable and interesting. She may decide to meet with us and discuss the possibilities.  She might also call the carabinieri on me.  Who knows?!
What do you think?  Should I go for it or should I just leave it be as I already have a nice, fairly comfortable job doing something I love.  I'm looking for opinions and suggestions before making a move.
Posted by Megan in Liguria at 12:35

Go for it! You never kn ow what will happen, but you do know that nothing will happen if you don't take a chance.

Go for it... Better to be rejected than to have regrets!

What a fabulous view! I know the area just a little, and that is pure gold. Wow.

I'm slightly more conservative but you know, regretting what you HAVEN'T done is much worse than apologizing for what you HAVE done.

I think you should do it. Why let it always remain just a dream?

I say it doesn't hurt to try and the results may surprise you.

What a gorgeous property! I'd definitely look into it more, go to the "catasto" office and get all the details. You never know. But you're on the right track getting on the Signora's good side.
This story reminds me of Gilmore Girls. I don't know if you've ever watched it but the main character had a dream of opening up a B&B and found her dream property, owned by an old lady. In the end she eventually got it.It may happen for you too!

Go for it. She may be looking for someone with passion and a true love for the property, not just a buyer. I would not mention the B&B aspect that may spoil the vision for her. Keep us posted please.

Go for it Megan!! Look at the dreams you've already manifested in your life... you're a pro. You have nothing to lose. Keeping my fingers crossed for you. If you need someone to help with the upkeep, I can be there in a heartbeat... just kidding, but not really. I truly hope it works out, I'm sure she fell in love with both of you and Lucy too! ciao ciao