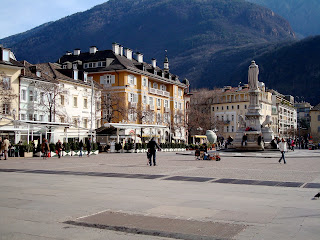 Bolzano (or “Bozen” in German) located in the Alto-Adige (or “Sud Tirol”) region is often described as the “Gateway to the Dolomites”. It is located in the basin of a deep valley surrounded one 3 sides by craggily snow capped mountains (those of the Alps to the west and of the Dolomites to the north and east). And while over 70% of its inhabitants are Italian, the Austrian/German influence is very apparent: the architecture, the food, even the accent. The buildings and streets are colorful and impeccably clean. It also has the highest per captia income of any other city in Italy - and it shows. Everyone is dressed so nicely, shopping bags abundant, fancy cars.  There was little to no sign of a “crisis” here. 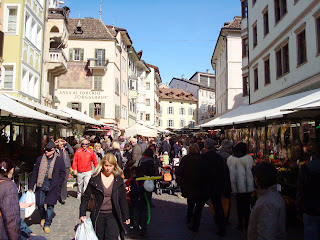 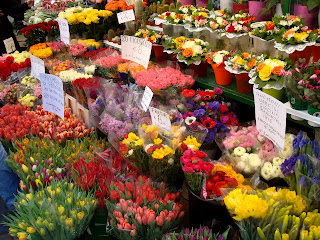 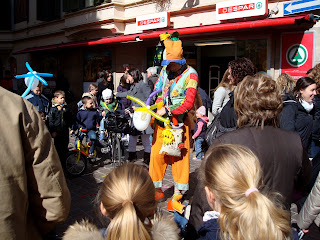 Our one-day visit was a sunny, spring-like day, one of the first this year, so it seemed as if everyone in town had come out from winter hibernation. The cafes in Piazza Walther (WalterPlatz) were packed with espresso drinking locals and tourists alike all with their faces held up to the warm sun. The cobblestone streets were alive with the local outdoor market (one of the best I have ever been to!) and sophisticated looking shops. And then heading further into the little back neighborhoods we found an endless number of “vinotekas” where natives were sprawled out into the streets with either a Tirolese beer or Venexiano (otherwise known as a spritz with aperol, my personal favorite) in hand. I was duly impressed. 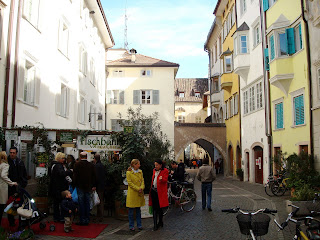 The gastronomic delights of this region include Tyrolean specialities include knödel dumplings, Schlutzkrapfen (little pasta sacks filled with spinach), venison goulash, sauerkraut, Trout and freshly baked breads unline anywhere else in Italy - plus and fabulous desserts such as strudel, kaiserschmarren (scrambled pancake with raisins), and even the world famous Sacher Torta - mamma mia! 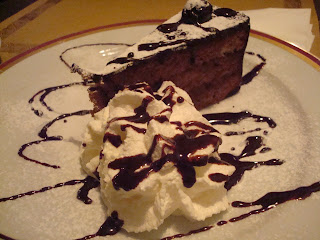 Speck (smoked raw pork) is the meat of choice and Lui enjoyed it to the fullest on his “Tirolese” pizza (speck, onions, mozzarella). And the beer. Hefeweisen just like you get in Munich! 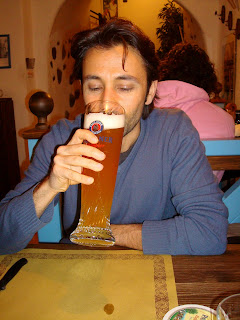 The sites to see are not abundant, but I think part of the charm of this good size town is just walking the streets and people watching in the piazzas. Regardless, here are few “must see’s”:
But the #1 attraction in Bolzano is “Ötzi”, the 3300 year-old well-preserved natural mummy that was found in 1991 in Ötztal Alps between Austria and Italy. He can be viewed in the South Tyrol Museum of Archaeology. The museum is dedicated to the mummification of people and animals, and although macabre in some ways, it is also amazing, even humbling, what scientists have been able to figure out about people and animals due to their “well preserverd nature”. They even know what Ötzi’s last meal was! (No photos are allow inside the museum.)
If you are skiing in the Dolomites or making your way from Italy to Austria (and vice versa), plan to spend at least a half day in this lovely “small city” that seems to combine the best of two worlds. 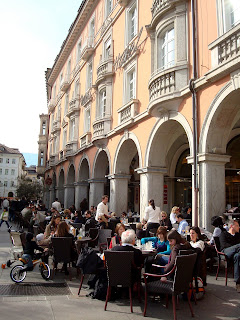 It looks so beautiful! And Hefeweisen!

Bolzano is a nice town. We have friends there and spent three summers in Oberbolzen (Soprabolzano) when the kids were little. Great vacations spot for families with little ones!

Did you eat any canederli? I love those!

Love it. For me, I guess it's that cross between Italian and German culture and food which is interesting and fun. I love your report about Bozen and the food made me hungry.

When one goes to a town like Salzburg in Austria during Christmas, many of the tourists there come up from Bolzano and the rest of Sud Tirol. They are often unbelievably well dressed in their "Loden" coats (those boiled wool coats in dark green) and gorgeous accessories.

I found your blog through facebook. I am living in Vicenza Italy and I really enjoy reading other blogs about Italy! Thanks for sharing!