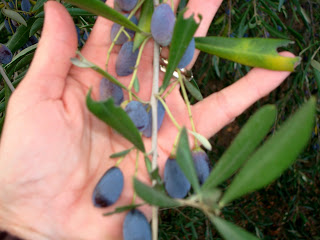 It's That Time Again!
The olive harvest has come to the Golfo dei Poeti a little early this year.  Usually it's the month of November when you see the red nets unravel around acres and acres of olive trees lining our winding roads and the hills. But due to the unseasonable weather (cold and rain in the spring, hot and humid summer, warmer than usual fall), the olives were starting to fall!
Our home and borgo is surrounded by uncountable numbers of these gorgeous, green and lavender glistening trees. And there is only one man who can get the job done right - our dear Gugliemo (William in english) - caretaker of nearly every holiday home in our borgo, my gardener and grappa drinking partner, and all around sweet man who sings while he works. 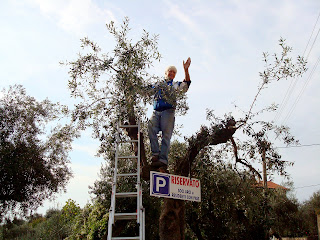 That's him hard at work cutting down the overgrown, olive laid branches (for which I recuperate a good part of my view, grazie!).  He and his wife take each branch one by one and either pick the olives off directly, or hit two branches together so the olives fall off (somewhat) naturally.  He's been at it for nearly weeks now and still has about a week to go.  But as he says, "Bella Bionda (can't pronounce my name correctly so he's settled on that), Gugliemo (in the third person!) e un'uomo preciso."  William is a precise man.  Which is his way of telling me, he'll not only get the job done, but he'll get it done perfectly.  He has also promised me a nice bottle of olive oil awaiting my return from California. 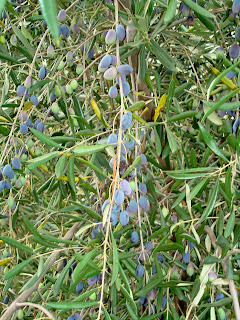 Is it safe to say I have a crush on the gardener?!
Posted by Megan in Liguria at 08:46

You will have your own olive oil? Beate te.

It's not OUR olive oil, it belongs to the borgo we live in. But I am sure we'll have our share of it! :)

Hello,
I've tagged you on my blog!

So glad I found your blog. I am an Italian/American feeling as if I never belonged in America and with hopes to relocate there one day. I will check in to live my dreams through your blog.