Today is my husband's birthday. He is turning the ripe old age of 29 (ha!). Obviously age has mattered little to us (if you know my age you'll know why!), but mostly because Luigi, as my brother Michael once said, "is so comfortable in his own skin". This is the part where I get to gush about him (it is my blog, right?!).

Top 10 Things about Luigi (and not necessarily in this order):

1) He wakes up every morning with a smile on his face and a positive attitude. I don't know anyone who does that, not one person.

2) He's super duper clean. Ok, annoying when he spends what seems like hours in the bathroom, but he really smells good.

3) He is respectful. He treats every conversation with interest and looks you in the eyes while you speak. I also learned to use the whole "lei", unfamiliar, be kind to your elders grammar thing thanks to him.

4)He has GREAT hair. It was half way down his back until 1 1/2 years ago. He'd wash it, put a comb through it once while it was wet and then never touch it again all day. And it looked like black silk. I was jealous. Now it's much shorter but still looks fabulous everyday. I am still jealous.

5) He has personality. It is not always easy to translate one's sense of humor or true feelings into another language, but Luigi has that "common sense" talent (which believe many do not) to figure it out a way to get his point across and often with a hint of sarcasm. It's charming to me.

6) He eats everything & anything. Thank God, because I cannot be creative 6-7 nights a week. He is always open to new foods, loves when I "go Mexican" and the spicier the better. On the flip side, he is a black hole and knows this and therefore never complains about the grocery bill.

7) He's "ItalCalifornian". Loves to surf, would live in flip flops and board shorts if he could, and gets the whole SoCal way of life. He too is a "beach person" and would have trouble moving away from the sea. I love that he is so Italian is so many ways, but that little California thing really makes things easier for both of us.

8) He loves Lucy. From day one he treated Lulu like his own. When he comes home in the evening she runs to greet him, wraps her body into his legs and sighs. I think she's saying "Poppy's home"!

9) He has wonderful parents who love him, and now me, with all their hearts. Even when they drive me crazy (is the cultural differences thing), I cannot forget what good people they are.

10) He is more beautiful inside than outside. An achievement few can claim in my book. 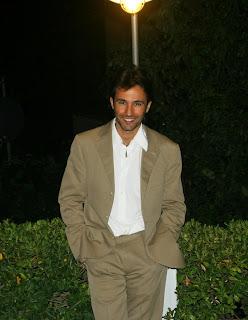 He sounds like a wonderful person, and it was sweeter to read your sweetness for him :) Uf, also realized I am soooo single, darn... Hehe

Hope both of you enjoyed his day :)

Megan, that was SO beautiful. I came across your blog because I'm in need of your planning services. I didn't expect to read such sweetness. You and Luigi sound adorable. And that picture... girlfriend now that was just wrong. Drop me in whatever town he came from pretty please! :)