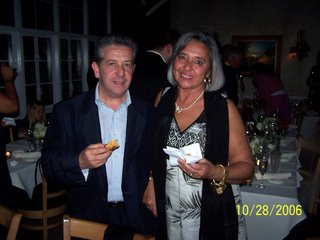 I happen to be very fortunate, my in-laws adore me. I also happen to be somewhat cursed, my in-laws adore me. Seriously, it is a double edged sword. I live in a culture where is it common to live with your parents until you get married, whether you are 22 or 45 year old. And in many cases, the married couple moves into the same house or the apartment downstairs (usually an inheritance). I live in a culture where your business is their business or at least they try to make it that way. And no matter how many times they say it’s because they love us, it’s still “butting in” to me.

This weekend is Christmas weekend which lasts through Tuesday, December 26, which is Boxing Day – something my family in the US has never celebrated. We are expected to be at my in-laws Sunday for dinner, Monday for lunch, Monday for dinner, and Tuesday for lunch and Tuesday evening for dinner. Overkill. But for them, it is the way it is, no questions asked. So you can imagine how it went over when I said we’d be there for Christmas Eve and basta. You’d think I’d committed a crime! The calls, the guilt, the hurt, it’s enough to drive me crazy at times. The best is when they say, did “we do something wrong”? How do I explain that “we (Americans) just don’t do things the same way”? In the end, Luigi has convinced me to go there for Christmas Day dinner as well. (Note, I offered to do it in our house, but there is not enough space – no joke!), but that’s it.

My saving grace is that my dear husband is finally started to understand where I come from. I’m not trying to be mean or ungrateful, but I am trying to set boundaries – and he agrees we need them. I adore my in-laws too, but Luigi and I need to be able to establish our own family, our own traditions and own life. In addition, I’d like to mix a bit of American culture in my Italian life. I may have moved to Italy, but there’s no reason I should give up everything I was and still am.

You always hear about the tight knit Italian family, but until you live it, you have no idea what it’s really like. It’s part blessing (they are wonderful people) yet very frustrating. They don’t complain about me, but the disappointment is clearly there whenever I/we say no. I guess it’s just something I will always have to deal with…

HAPPY HOLIDAYS and may you enjoy and cherish the time you have with your families, even if it is a overkill!

P.S. My father-in-law just called. The neighbors are coming over this evening to watch the soccer game and with a bottle of spumante and a panettone to celebrate Christmas, are we coming??!!
Posted by Megan in Liguria at 11:16

"I’d like to mix a bit of American culture in my Italian life. I may have moved to Italy, but there’s no reason I should give up everything I was and still am."
I know, I know! :)

I moved to Australia as a child, but I am seventh generation American, spent my formative years there, then was raised in an American family.

(I actually feel I have come home again on the Slow Travel website.)

While browsing your site I came upon your interesting topic, family. Unlike marriage to an Italian American, you have united with a family embedded in a root of a culture. A traditional culture at that! Although you may find it all overwhelming at first, the very imposition of family can be your marriages greatest assest over time(especially during tough times). To Italians family time is not cultural but rather it is natural. "Family" is a natural creation that is common to all cultures (like birth, living and death). With whom would we rather spend holidays with but the family that loves you? When those around us all die, there will be plenty of time to spend alone! For a change of pace you and your husband could spend the Holidays with your American family. Though they would end up spending the Holidays without you both, your Italian in-laws would probably approve and encourage this act of family. No question that the "american way of life" has produced greatness in the world, but when it comes to family and marriage, Americans have a lot to learn from the Italians. When it feels like it is too much, just remember that it is all coming from a good place.

I empathize with what you're going through. I live in Switzerland with my man, a good ten minutes from the rest of his family. This is already close for me. The weekly meals are strange for me. However, unlike in Italy, here in CH people are rather stern and cold - even in family, and sometimes worse so among family members. I try to avoid some dinners, simply because I know I will sit there wondering why on earth we all showed up for this charade. Jon and I have had to deal with American culture - and more specifically, how I'm not going to be able to, NOR WANT TO, give it all up. Going to the grocery store in my hoodie and sweat-pants is an integral part of my midwestern girl self. I get pointed at, but oh well. I empathize with the family thing, but at least yours seem like a good time!good luck!