The Downside of July on the Italian Riviera 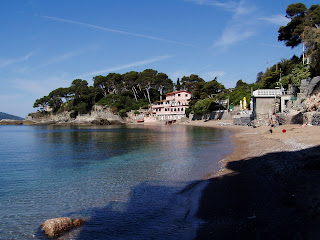 The beautiful beach in quieter times...

I grew up on a pristine, private cove in southern California with 350 days of sunshine a year. It was paradise to me. My husband grew up going to an exclusive “stablimento balneare” where his perfect lounge chair and ample space to play awaited him every day of the summer. Together we are 100% bonafide beach snobs. I admit it and with good reason.

By the end of June the public beaches of Italy begin to fill up with locals and tourists alike. It’s a methodic, seasonal thing that never changes, and goes until just after Ferragosto, when just like the clock striking midnight for CInderella, it’s time for everyone to go home and prepare for autumn. So why would be even attempt to go to the public beach on a Sunday in mid-summer? We only wanted a couple hours of morning sun and Lui wanted to take a good swim (aka more like a work out). We knew our beaches in Lerici would already be packed, so we thought that at 9AM we’d find some space and peace at the large, long open beaches of Marinella, just a 15 minute drive from home. Wrong.

The first sign should have been the effort it took to find a parking space (at 8:50AM). But we were determined for that swim! Upon arriving at the beach, this is what it looked like: 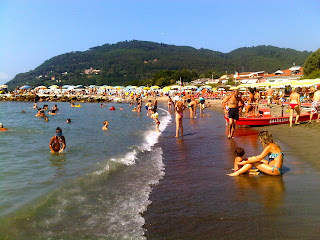 9AM on a Sunday in July

Peace and space went on vacation about last June 1. 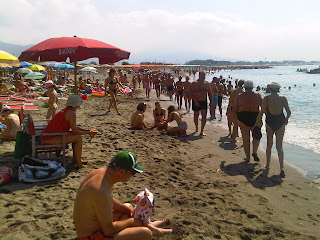 Within the first 1/2 hour, we watched two women get into a fight (almost physically) because one of their kids splashed the other one; a man in a g-string and nothing more almost knocked me over with his morning jog through the masses (I was too in shock to take a photo, what a shame); a family of 5 literally placed their towels on top of about 1/3 of ours to claim their territory for the day; a baby made a “bella cacca” (as the mother cooed) in its diaper about 10 feet away and then the mamma decided to clean off his little bottom in the fresh sea water just in front of us.

With that, we got up, took our belongings, got back in the car and sat in the garden for the rest of the afternoon.

If you don’t have a boat and you can’t find the perfect rock to lie on, pay the cold hard cash for a nice lounge chair and umbrella at a private beach club. Believe me, it’s worth it. 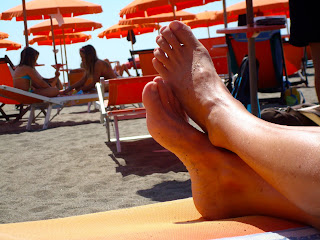 Where I would have been had I been thinking clearly!
Posted by Megan in Liguria at 11:22

So true! Here the public beaches are often littered with garbage, too, bleh.

Oh my gosh, I'm sure it wasn't funny for you in the moment, but you had me laughing. Cheers to August 16th.

My father's trick to avoid the crowds was to go in the late afternoon as people were leaving and then we'd stay until it got dark.

This post made my day! (Oddly, I still miss Italy after reading it!) Thank you!

My email is down - got in late but fine. On our way to train station. See you in Sarzana! -M

I definitely would have paid the entrance fee for a nice chair and umbrella...Funny observations, not unlike most public beaches. xxoo :)