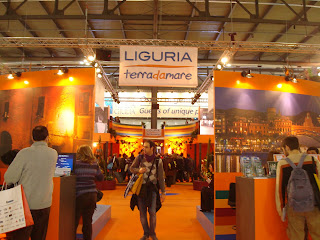 Gauging by this past weekend.  Besides million+ people at Carnevale (a definitive mix of Italian and foreigners alike), the marketing and promotion of Italy was going strong at the BIT (Borse Internazionale di Turismo) convention in Milano.  I didn't know what to expect, but I was "wowed" by just about everything.

Each region had its own exhibition (halls were split by North and South).  I started with the North. But before that...on the metro ride over, I noticed so many people with their suitcases.  I was thinking "now why didn't they just leave them at the hotel?"  Little did I know then (the novice I was), the suitcases were EMPTY.  It wasn't until I saw the abundant amount of free stuff from brochures to books to calendars, etc., that I realized just how important an empty suitcase was!  I ended up lugging around a 10 kilo bag of stuff - and that was before I hit the South!
Another BIG plus, everyone was serving local food and wine...for free!  I tasted some of the best ever mozzarella di bufala from Calabria, Pacheri sun dried tomatoes and paste di mandorle from Sicily, marinated olives from Umbria, pesto from my Liguria, not to mention some really fabulous wines from Puglia, Le Marche, Veneto and Abruzzo (not to worry, the wine was served in caffe plastic cups not wine glasses full!).
Anyway, Most of the displays were quite impressive.  Those that stood out, fun enough, seem to be the really "up and coming" places and exactly what I was most interested in, including (my photos did not turn out as well as planned so bear with me here): 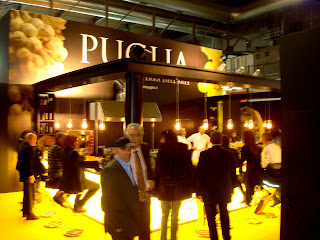 Puglia - They were even giving cooking lessons with a meal on the hour! 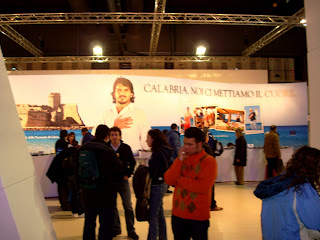 Calabria - This one's for you, Michelle and Cherrye! 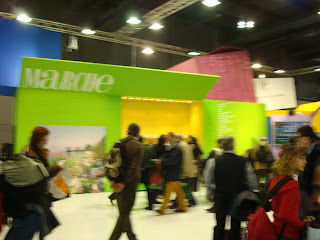 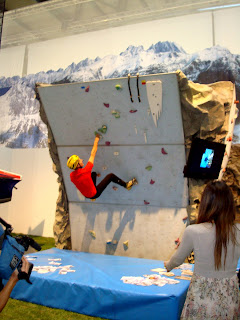 Fruili-Venezia Giulia - Sea, Mountains, Cheese, Wine, what more can you ask for?!
I arrived home with so much helpful and important information.  I'm not sure how long it will take me to get through my bag of goodies.  But I can't wait to dive in!
**BIT takes place every February in Milano.
Saturday and Sunday the exhibit halls are open to the public.
The entrance fee this year was 12 Euros.**
Web Site
Posted by Megan in Liguria at 09:49

Hey Meg, the blog looks great!! Next year I want to go with you to the fiera.

Ciao, I just popped over to your website! It looks great! You've been busy and it shows...

Let's hear it for Marche wines! Looks like a fabulous fair; wish I could have attended. Thanks for the vicarious visit.